Reduction of Outflows and Pollutants

The reduction of outflows and pollutants will be realized through the following strategies:

Use of innovative plastic films with reduced thickness for the roofing of the greenhouse.
Our proposal consists of using innovative films, which are not only extremely opaque to infrared radiations (refer to the page Reduction of Energetic Requirement), but also characterized by a reduced thickness (100 micron) and a long-time duration (up to 6 years). These peculiarities allow to use less plastic in the course of time, and therefore to reduce problems of waste disposal and recycling. In comparison with other sorts of films normally in use, in this case the opacity is achieved without chemical additives (minerals), with a consequent reduction of environment pollutants.

Use of the Closed-Cycle Hydroponics Technique.
Cultivating without soil (Hydroponics Technique) allows us not to use the soil and to preserve it from contamination due to fertilizers and pollution. Pesticide gases are often used in normal cultivations in order to disinfest the soil, letting these chemical pollutants contaminate the soil and its layers. Moreover, the Hydroponics Cultivation Technique offers the possibility of realizing a precise regulation of the irrigation and of the distribution of fertilizers through watering, optimizing the use of chemical products and reducing the amount of toxic waste being dispersed, at the end of the cycle, into the environment. For this purpose, the greenhouse will be provided with a computerized fertilizing irrigator and a pre-mixing tank, which will allow, according to a programmed “recipe”, the automatic mixing of fertilizing mixtures with some basic components or primary mixtures and an acidic solution (for PH regulation), which are contained in suitable tanks.
Specific software will manage the fertilizing recipes, while also programming EC and PH values, irrigation time, fertilizing recipe and irrigation interventions, in compliance with time, light radiation and drainage.

Realization of a plant for the mechanical distribution of antagonist entomphagous inside the greenhouse. 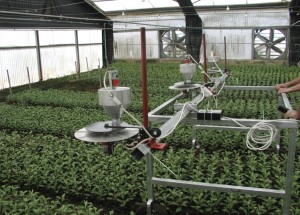 The aim of this technique is to introduce into the greenhouse “useful” insects and acarus , which prey or parasitize phytophagous insects, with the purpose of contributing to a reduction of environmental impact deriving from the use of pesticides, also in compliance with recent EU-Directives. In order to reach this purpose, we will plan a possible solution suiting the structure of the greenhouse and then we will achieve the plan. There would be a moving system anchored to the main structure of the greenhouse, which allows the installation of the distributors realized and tested by the Mechanical Section of the Department of Agro-industrial and Environmental Systems. (Picture 1) 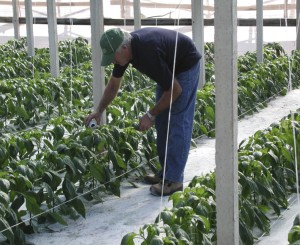 The latter would distribute natural antagonists from the top of the greenhouse downwards, equally covering the cultivated plants and at the same time, reducing the times necessary for the manual distribution of the product. (Picture 2) With this system, if the rapidity of the intervention and the opportune doses are respected, the cultivation of these species has a null impact, because of the use of natural products which don’t create soil and air pollution, and because the machinery could be powered by electrical motors, producing neither noise nor emissions, which could be toxic for operators in the greenhouse. This pesticide system , although a little bit more expensive than the chemical one, must be considered as a medium and long term strategy, that will be so effective as the conditions of the “useful” insects will be favourable inside the food chain of the agro-ecosystem.