Description
Muscari gussonei (Parl.) Tod. (=Leopoldia gussonei Parl.) is a little bulbous geophyte belonging to the family Asparagaceae, included in the Enclosure 2 of the Habitats Directive as Species of Priority Conservation. It’s a narrow endemic species of Sicily, living in the South-Eastern sandy coasts of Sicily, with a spring-blooming cycle (March-May), listed in the Red List of Italian Plants as an Endangered species (EN) (Garbari & Di Martino, 1972; Bartolo and others, 1982). This plant produces numerous seeds with a high average of germination. The dispersal possibilities of this plant are quite limited, due both to the kind of seeds falling near the mother-plant and to the heavy inconveniences against its habitat (2230 – Habitats Directive).

Habitat
From an ecological point of view, Muscari gussonei grows exclusively on inland dune sandy soils, where the substratum is quite solid and less windy. From the phytosociological viewpoint, this species characterizes the Vulpio-Leopoldietum gussonei (Brullo & Marcenò, 1974), a spring psammophilous community (that means a vegetation living in sandy and salty soils), living exclusively in Sicily’s Southeastern sandy coasts, belonging to the Cutandietalia maritimae order (Minisslae & Sciandrello, 20013).
Many years ago the botanist Lojacono Pojero (1908), caught sight of it from Terranova (ancient name of Gela) to Capo Passero. In recent times Giardina and others (2002) confirm it for Cava Randello; Cundari and others (2003) for the Vittoria Pinewood, while Brullo and others (2000) (Giusso & Sciandrello, 2003) and Guarino and others (2008), caught sight of it in Poggio all’Arena, westerly from Gela. At the moment it’s the most significant sub-population (about 1.000 individuals), while the others surveyed are quite scarce and fragmented. 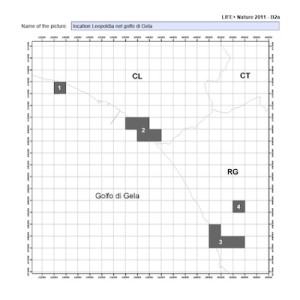 Using as measurement criterion a 2×2 km-sided square, the populations fall in ten squares (Picture 1). Therefore we can consider four locations, because some sites are quite near each other (Picture 1):

Main Threats
In the target area we attend to a continuous decline of the surface and quality of its habitat and to a reduction of mature individuals: the habitat where the species is found at the moment (above all location 2), the main target area of our project, is exposed to strong alterations mainly due to human negative interventions, such as intensive agricultural activities (greenhouses), which cause environmental pollution and landscape alterations. The spread of polluting substances (plastic and pesticides) and the structural changes done for cultivations (destroying of woody vegetation, leveling of dunes) have extremely devastating consequences. Dune habitats have great appeal on farmers, because of their favourable conditions which permit them to obtain quite high production amounts.
After all, greenhouse agriculture has extremely positive social and economical consequences and, therefore, it’s necessary to find alternative solutions in other sites, in order to make agricultural activity compatible with biodiversity conservation, and to preserve the balance between environment and economics.

Conservation Measures
In order to avoid making our work useless, it will be necessary to do a population census and to protect it.
Excavations on dune systems (Sand Caves) will be absolutely prohibited; agricultural activities in private grounds aiming to conserve Leopoldia gussonei will be promoted; the local germ plasma will be reproduced and placed in suitable areas, without forgetting to make public aware of the importance of species conservation.

Studies
Inside Life+ Leopoldia Project, various monitoring actions have been planned (demographical study of Leopoldia gussonei populations, census of the individuals of each species, ecological analysis of the habitat, phytosociological analysis of the populations, recognition of the main threats for the species and for its habitat, etc.) aiming to understand the real causes which have produced a drastic reduction, and in some cases the disappearance of Leopoldia gussonei, with the ultimate purpose of re-introducing it in suitable areas and increasing its number of individuals.

Look the locations and the target areas delimited by polygons on GoogleMap.