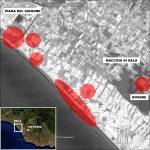 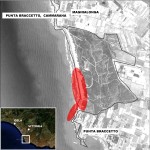 The places chosen for our project have all been defined as Sites of Community Importance (SCI) by the European Union, due to their natural habitats and their animal and plant species, which contribute to maintain biodiversity, allowing them to be enclosed in the Natura 2000 Network.

Torre di Manfria, Biviere di Gela, Piana di Gela: SCI - SPA
This Site of Community Importance (SCI) and Special Protection Area (SPA) including the well known Manfria Tower, Biviere Lake in Gela and Gela Plain, is of great natural significance, comprising a Wetland of International Importance (Ramsar), characterized by lakes, rivers, marshes or lagoons, whose depth at low tide doesn’t exceed six meters. These wetlands play a key role in winter for the nesting and the resting of various animal species, both migratory and sedentary ones, and represent a fundamental ecological unity for both flora and fauna. This SCI and SPA is located on the Southern Coast of Sicily and has a surface of 178.4656 km², an average of 3.6 % of the regional natural network.
Its strategic geographical position and the hilly morphology of the Gulf of Gela allows birds to come from North Africa and cross this area in spring.
In this Site there are 71 species listed in the Enclosure I of the Birds Directive, 93 migratory birds, 12 species listed in the Enclosure II of the Habitat Directive, 38 Inland Regional and Italian species and subspecies, 109 species enclosed in the Red Lists, in the Enclosures of international Directives and Conventions, etc.
The dune shoreline of this SPA has a length of 10.000 meters and hosts – in its State Properties – Priority Habitats and our target species Muscari gussonei (Leopoldia).

Treats
The dune area, until sixty years ago covered by Maquis or scrub (in Italian known as “macchia mediterranea”), are menaced by a protected plantation, particularly extended between Biviere Lake and the sea. The large use of intensive greenhouse plantation instead of traditional agriculture, has almost destroyed the agricultural mosaic of the landscape, causing a great waste of water (particularly dangerous in the fragile systems of wetlands), water pollution and a significant increase of special waste, chemical materials, weed killers, fungicides, representing a serious problem for the biotope. The dune area is mostly characterized by numerous and frequent excavations and leveling activities, in order to create new greenhouse plantations, and is been reforested with species which are extraneous to this territory.
Other human activities with high environmental and visual impact (such as industries, oil fields, unauthorized buildings) coexist with beauties of significant historical-archeological value (medieval monuments and villages, ruins of various Hellenic and Roman sites) and with relevant productive sites (artichoke fields in the Gela Plain, the mixed plantation systems on the Hills).

Punta Braccetto - Contrada Cammarana: Site of Community Importance (SCI)
This site stretches 9 km along the western coastal line of the Province of Ragusa, between the suburbs of Braccetto Point and Scoglitti, and the Disctricts of Ragusa and Vittoria.

This area is characterized mainly by sandy strands and wide dune coasts with some mono-crop fields (including poplar groves and exotic plantations). The landscape we can observe in the Northern part of this area is made up of houses belonging to the suburb of Scoglitti, which are situated among quite altered sandy dunes, and some rests of the famous “Macconi di Cammarata”, whose name by now represents only a mere definition. From the left side of the River Ippari to the residential area of Braccetto Point, we can find banks of greenhouses, characterized by a strong visual impact.

This site is extremely important also for the wide range of animals, mainly invertebrates, whose presence is strictly bound to those dunes typical of some zones of Southern Sicily.
The Habitats of Community Interest in this area are listed in the Habitat Directive and are 12, one of which is a Habitat of Primary Interest: 2250.
A part of this site is included in the Archeological Park of Kamarina.


Treats
This area is extremely altered by greenhouse plantations and beach resorts. The main dangers for the habitats of this area are roads and invasive species, particularly Hottentot Plant (Carpobrotus edulis).
(Source: SCI-Management Plan)

Cava Randello, Passo Marinaro: Site of Community Importance (SCI)
This site has a surface of 497 hectares and is located inside the Ragusa District along the Randello Cave Valley. Its wide valley floor on which the Rifriscolaro Stream and many canals flow and which was swampy until last century, has become an area of cultivated soil.
The surrounding landscape on the North side is made up of grasslands belonging to holiday resorts; on the South side, the numerous greenhouse plantations are quickly replacing the typical plantations, such as carob groves, olive groves and arable fields.
This site turns out to be extremely altered by human activities, because inside the Cave we find many extensive cereal plantations.
The six Habitats of Community Interest inside this area are listed in the EU-Habitat Directive, and two of them are of Priority Interest (*): 2250 and 6220.
Two plant species of Priority Interest live in this site, such as our target species Leopoldia gussonei and Ophrys lunulata, and other important flora populations, like marine cistus (Cistus monspeliensis), cyclamen (Cyclamen hederifolium), mastic (Pistacia lentiscus), rosemary (Rosmarinus officinalis), etc.
This site has great geological and botanical value, due to its extremely rare and hardly traceable vegetation peculiarities. The whole area belongs to the Archeological Park of Kamarina.
Muscari gussonei is particularly copious in Passo Marinaro, but only inside the fenced area of the necropolis extra moenia (necropolis outside the walls) of the ancient inhabited area of Kamarina.

Treats
This area is characterized by a high vulnerability due to an excessive pressure of pasturage and to the cultivation of many portions of it, that is to say, due to a high amount of human activity.
(Source: SCI-Management Plan)

Ippari Valley (Vittoria Pinewood): Site of Community Importance (SCI)
The land of the Ippari Lake Valley involves many districts: Vittoria, Comiso and Ragusa (RG); this area is located in the low section of the Ippari Lake between 40 meters above sea level in Contrada Cammarana and Salina, and 180 meters above sea level in the suburb of Vittoria.
The target area is located on the base of a hill between the Hyblean Plateau and the Mount Erei; it’s a wide flatland, the so-called Piana di Vittoria (Vittoria Plain). The area descends gently towards the sea, with wide wavy forms coming from the erosive action of surface water streams, engraving a substratum of clay and sand layers. It’s a wide flat-bottomed valley with abundant alluvial sediments. The peculiar extent of the valley in this area (stretching between the suburb of Vittoria and the Ippari estuary in Contrada Cammarano), has facilitated human settlement and caused the agricultural exploitation of its side portions and, in some cases, of the very riverbed and of the lands beyond the riverside. It concerns a particular variety of plantations which once were also very precious, because they were produced in the sole irrigation garden zone inexistence until about fifty years ago. Wide river banks were built near the estuary in order to prevent floods and fully exploit the alluvial valley for agricultural purposes.
Moreover, in the area of the estuary, near Contrada Cammarana, the river flows among ancient dunes, by now almost disappearing because of human activity.
Most of this site coincides with the boundary of the so-called Riserva Naturale Orientata Pino D’Aleppo (Natural Reserve Pino D’Aleppo). For the past several centuries, agricultural activities have been very widespread and intense in this SCI (53%). The most frequent plantations are vegetable gardens, citrus groves, vineyards, carob groves and olive groves.
The areas involved in the Life Leopoldia Project are State Properties, where we can find two Priority Species included in the site standard formulary: Muscari gussonei and Ophrys lunulata. Two more locations of Muscari gussonei have recently been found in Contrada Cammarana.
In Contrada Brancato-Buffitella (on the right side if the Ippari River, towards Case Buffitella) and in Poggio Gerbe. About 800.000-1.000.000 specimen (in both cases the estimate was based on the casual extraction of squares with 50 cm sides).
On the right side of the Ippari River there are various sandy areas which would be perfect for the rooting of Leopoldia.
(Source: SCI-Management Plan)